Duck fans Across the "Pond"

We just returned from an exciting adventure to Europe where we had the opportunity to meet the friendliest fans of the Disney Afternoon and Feature work that Patty and I were fortunate to be a part of over the years. Before we set foot into the plane though, we both were working hard months earlier to create something special for the collectors that were already contacting us about the events. In fact more than a year earlier I was commissioned to create an oil painting while Patty was likewise asked to create another of her stunning "cloth creations" which have become so well known and collected at the Disney Parks.

My better half and I began creating some new pieces in our little studios. Obviously a certain miserly mallard from Duckburg, Uncle Scrooge McDuck, is one of our favorite subjects! My painting, "Portrait of Success," is in oil and I actually let it dry for over 8 months before applying the Damar varnish. Patty created her piece, "Number One Dime",  entirely from thread, cloth, and a bit of stuffing hench the branding phrase she uses, "Cloth Creations". She was constantly cutting, re-cutting and trying new cloth and thread combinations over many weeks to get it exactly the way she wanted it.


From the ODOR IN THE COURT Dept: After carefully and s-l-o-w-l-y drying the painting in a custome drying box (with side vents) over a period of just under a year it was ready for the final application. Applying a couple of coats of old school Winsor Newton Dammar varnish over my dried oil portrait painting of Scrooge McDuck was a bit daunting. I heated up a jar of Dammar within a bowl of boiling water and just a hint of turpentine in the traditional method to help thin it a wee bit so it would go on smoothly. The varnish really brought all the color back to life! Very happy how it all came together, except for that smell. A day later and the smell is almost gone!
As Scrooge might say, "It all makes SCENTS now." 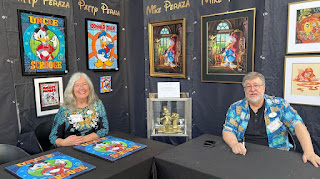 This photo of Patty and I was taken moments before they open the doors of the event to the public. (They're expecting over 28,000!) The jet lag might be there but hopefully no one will notice. Patty said if I start to get sleepy she'll be happy to pour cold water over my head. (what a doll!)

It's times like this when we're signing with paint pens, that I'm glad my name doesn't have too many letters. And for those wondering, NO, I am not about to sign the tablecloth. They had just removed a stack of glicees I had signed before they took this pic. They did an amazing job reproducing my oil painting 1 to 1 size on heavy weight acid free paper. 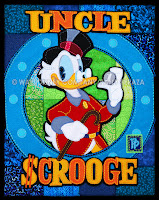 But let me tell you about Patty's latest Cloth Creation. I really love what she has created and the photo here on the right really doesn't do it justice. Eveyone's eyes pop and jaws drop when they see it up close. I will say though that the glicee reproductions of her cloth are actually are so sharp you might think they are the original cloth instead of the stretched canvas surface! It is truly a magnificent piece fit for Scrooge's Money Bin Gallery!

An interesting bit of trivia, Patty went with the traditional red coat used in European comics and older Disney editions while I went with the blue coat we used on our original series of DuckTales. (I prefer the red one, but don't tell anyone.) 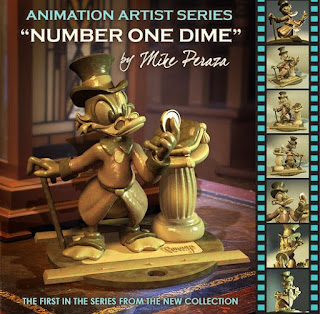 This event also gave me the opportunity to pay tribute to my old friend Carl Barks and his character creation and the inspiration for our DuckTales series in a sculpted form in addition to the oil painting. This is the first of a series of animated characters I am sculpting that will be released as a resin cast with a gold color finish (what else would Uncle Scrooge have preferred!) and the bronze version will be a later edition.

This wasn't a sketch sent overseas to have someone else sculpt which is unfortunately the norm for most Disney collectable pieces these days. instead, I drew it out in sketches and sculpted this piece myself. Scrooge McDuck and future Disney cartoon animation legends will also be posed atop the sculpted version of my trusty old animation disc. This was my original prototype and I was playing around with tints. The resin will be completely one color (Scrooge McDuck prefers the gold hue) but the later bronze may have value tints and even colors. The resin was reproduced beautifully and is in an even smoother finish than this.
I was surprised that no one I spoke with overseas was familiar with the base that I made which was "based" on an old animation disc.


Patty and I have been blessed to meet so many incredible fans at the event. One person took a boat for 3 hours from the island they lived on to get there to see us and purchase a signed sculpture. Another got up at 5AM and drove over 4 hours for a print of the oil and an original pastel!
Thank you to everyone who has made our visit so memorable including Koushi, Kamilla, Brian, Paw, Tora, Anders, Glenn and especially Niels and to everyone who stopped by our table. We are truly humbled at all of these amazing fans and it is an honor and privilege to be able to spend time with them. 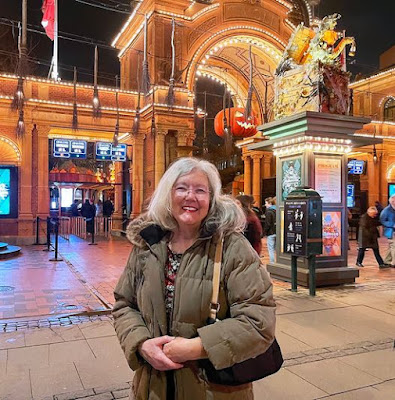 Like all good things, even this lively fan event came to an end but as they say when one door closes, another one opens. Well that doorway was to Tivoli Gardens! Walt Disney visited here many times and found inspiration for his park to be called Disneyland. Patty is waiting for me to take the dern photo so we can get into the park.

The park opened on August 15, 1843 and is the third-oldest operating amusement park in the world. Tivoli is always evolving without abandoning its original charm or traditions. George Carstensen said in 1844: "Tivoli will never, so to speak, be finished", a sentiment echoed just over a century later when Walt Disney said of his own Tivoli-inspired themed park- "Disneyland will never be completed. It will continue to grow as long as there is imagination left in the world". 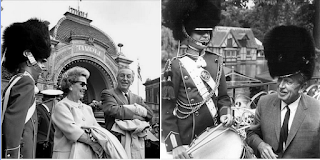 It's therefore no secret that Walt was extremely impressed with Tivoli Gardens and studied elements of it as a basis for his future park to be called Disneyland. Lillian and Walt enjoying one of their many visits to Tivoli while Walt trades his usual skimmer hat for a bearskin shako in the photo on the left. 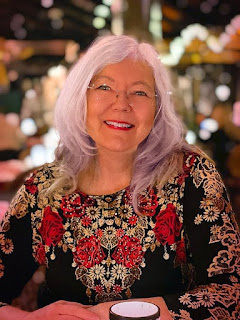 When I was 3 1/2 years old in New Orleans, my dad gave me a bit of his steak at a steak house in the Big Easy. It was the best thing I have ever eaten and have searched with no luck across the globe for that same taste since. Well, we found it in Tivoli Gardens where Patty and I had the most scrumptious birthday dinner at Groften's Restaurant in Tivoli Gardens! The service and meal were the best! What a wonderfully romantic evening!!

As empty as the gardens were, this place was packed, and with good reason. The food was the best I've had in a long time,... outside of Patty's cooking (whew! close call). All those years later and I finally located that delicious steak flavor, in another country! 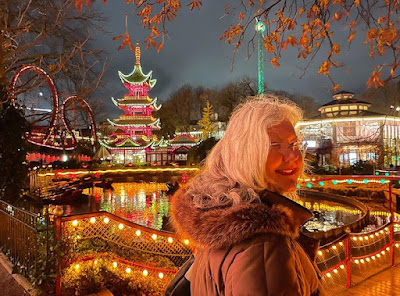 After celebrating our birthdays with that delicious dinner, we left the restaurant and got something to drink from the local cauldron to wash down a swirl of cotton candy. We got the inside dope where to stand for the animated water and light show and we were not disappointed.

If the place looks fairly empty, it's because being the last day of the season,... it was pretty much was. We weren't complaining as there were no lines for anything, and it was simply beautiful! 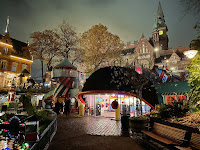 Tivoli Gardens is such a lovely park and made even more magical with the cool light mist that was wafting throughout the evening. We got the inside dope where to stand for the animated water and light show and we were not disappointed. If the place looks fairly empty, it's because being the last day of the season,... it was pretty much was. We weren't complaining as there were no lines for anything, and it was simply beautiful! Here is Tivoli's iconic whale's mouth snack stand with the old lighthouse next door still illuminating the area. You can probably tell that it was cold and a light drizzle of a fine mist permeated the park. Patty and I just loved it as it is certainly a change from perpetually warm and sunny Southern California. 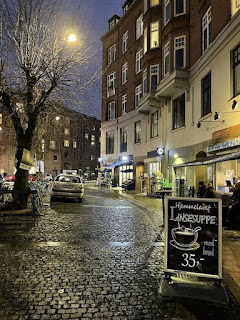 It's easy for us folks with squeaky knees to walk around across Copenhagen as it's relatively flat, like a few of my jokes. Patty and walked across this bridge twice a day. The view of Nyhavn, Copenhagen along the canal is lovely, even when it's overcast.
Our lovely Copenhagen apartment is just around the corner but out of respect to the owner who graciously gave it to us during the stay I won't show any photos or give the address.
Every turn in this beautiful city presented us with yet another stunning view of magnificent architecture and friendly people. It's nice to see folks embrace and hold onto their architectural history and culture.

The sign by the way is from a little neighborhood cafe and is advertising their delicious homemade Lentil soup with bread. 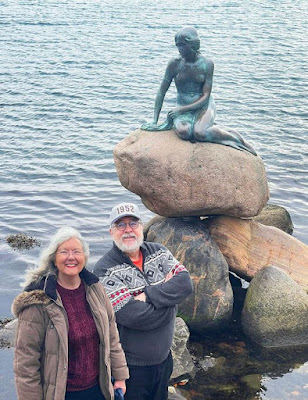 We had to visit the Little Mermaid statue while we were here. There was a small group of kind people there that helped us get closer (to Ariel) on those slippery wet rocks without falling into the water, and took the photo for us.

Another checkoff from the bucket list. Well, we have to pack now and head home. SO relieved we don't have Covid!