On December 18, 1933, Walt and Lillian Disney were blessed with the birth of Diane, the first of two lovely daughters who like many children would give plenty of inspiration to their parents. In this case, the inspiration eventually included not only giving honest feedback from a child to her famous father as whether she liked the latest Disney animated feature but also introducing Walt to stories she and her sister Sharon enjoyed such as "Mary Poppins" and begging him to make them into films. Thank goodness for the rest of us!

I first met Diane, Ron and her delightful mom Lillian at a CalArts event in the mid 1970s and never forgot their graciousness and charm with a rough around the edges boy from the south who someday hoped to work at her dad's dream factory. Diane and Ron had just recently purchased land in Napa Valley that they would develop over the years into a world class winery known as Silverado Vineyards in 1981. After Lillian's passing, Diane's leadership was also key to seeing her mom's dream of the Walt Disney Concert Hall become a reality and that architect Frank Gehry's original design would be implemented when it finally opened in 2004 instantly becoming a center for classical music and the arts in Los Angeles. There was a well documented exchange between Diane and a couple of local politicians over the final design but Diane fought to see her mom's vision and tribute to Walt Disney completed. Her husband, former studio president Ron Miller, could have told the dignitaries not to mess with her. Apprised of the "housewives" description, he countered, with a laugh: "If you like your housewives tougher than hell." Seeing that project through to fruition gave her the courage to take on further endeavors.

Perhaps one of her greatest achievements, besides her 7 children with Ron, was her creation and development of The Walt Disney Family Museum built within a former Army barracks in the beautiful Presidio of San Francisco which opened in October of 2009. One of the things many of us  share with Diane is that on most Sundays our dads used to take the family out for drives. Down south the Peraza family would end up at Dipper Dan's for Ice Cream after a day at Gulf Shores fishing and swimming while on the West coast the Disney family would often end up in Griffith Park at the beautiful carousel and while waiting for Diane and Sharon to grab the brass ring Walt began to dream of a place where entire families could truly enjoy time together. That place would someday be known of course as Disneyland.

Today that bright light she had lit has dimmed if for only a moment as Diane Disney Miller passed away at the age of 79. I thank you Diane for not only sharing so much of the wonderful history of your family with all of us but for keeping alive the vast legacy of your dad. From the Concert Hall through to the Museum, Diane was composing a musical memorial of sorts to honor her remarkable parents. The song may be ended Diane, but your melody will linger forever. -MP
No comments:

Patty, Queen of the Pixie Dust!

November is a very special month for most of us with the holiday season just peeking around the corner but for me it holds even more significance. My beautiful and talented wife Patty was born on November 10.


I met Patty while in line at the CalArts bookstore purchasing some supplies for the first day of Character Animation classes back in the 1970s. She was a sweet thoughtful but determined young lady whose talent had already achieved a full scholarship at the school. She was the FIRST female to be hired by the Walt Disney Studios out of the new Disney Animation Program. Patty was hired in the Effects Department and never complained as she was often given the "worst" scenes to animate. By "worst " I mean scenes with lots of pencil milage and detail that other animators would purposely avoid to keep their footage looking good. Patty made up for it by taking those scenes home at night and over weekends in order to instill the quality she was demanding. Her effects creations can be found in Fox and Hound, Mickey's Christmas Carol, The Black Cauldron, Basil of Baker Street (Great Mouse), Beauty and the Beast, and numerous films for EPCOT, Disneyland, Walt Disney World, Tokyo Disneyland, and even TV shows such as Duck Tales.

While waiting for "Black Cauldron" to ramp up into production, Patty worked on short films for the various Disney Parks. These projects could be anything from the cartoons guests enjoyed while waiting in line or even effects within the attraction itself.  Patty got word from her Assistant Director that they were screening some of her full color scenes for a Tokyo Disneyland attraction called "Meet the World" in the 3rd floor sweatbox and when she snuck in to watch she was horrified to see only two figures sitting in the entire theater. As her eyes got accustomed to the dim light, she recognized Ron Miller sitting next to her director Dave Michener. Her scenes came on with earthquakes, volcanoes erupting spewing lava, steam gysers and floods of water. Ron asked Dave if McManus had animated the scenes and he said no it was Patty Peraza. "Is she an animator?" he asked. When Dave told him no, Ron replied, "She is now!" As Walt had done many times at this magical studio over the years, Ron Miller was giving opportunities to those willing to work hard to earn them.

So Patty became the first female Effects Animator in history at Walt Disney Studios. Volcanoes weren't the only things erupting as management soon realized Patty was the ONLY female animator at Disney Studios when during taping of "Good Morning America" that fact was brought up by GMA reporter Joan Lunden while interviewing Patty live from her room at Disney Studio.  The interview went fine but there seemed to be a slight underlying theme that they were trying to elevate about women not being treated equally at Disney Studios. Patty avoided that can of worms by concentrating her answers on current films in production and explaining how she accomplished the effects she was creating. Let's face it, Patty's promotion was itself proof that Disney was very interested in bringing about more equality between the guys and gals of Disney animation. We still have the VHS copy of that interview that the studio was gracious enough to give her. 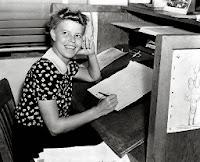 After the interview Ron Miller and Ed Hansen (who was head of Animation Management) spoke to Patty and requested names of other females she thought deserved the promotion to further demonstrate the studio's goals. So less than 2 weeks after her promotion, 2 other ladies also were made full animators (one was a name she had even submitted). Of course Disney hasn't stopped there and continues this day to give responsibility to anyone willing to work hard and earn the right which is evident in the latest Disney film soon to be released this month, "FROZEN", with a talented young lady named Jennifer Lee as a Director.

The honor of being the first female animator at Disney Studios of course belongs to Retta Scott who opened the door, albeit all too briefly, for women in animation at Disney and through her talent was credited as animator on films such as the Disney classic "Bambi" when Walt saw her amazing story sketches and assigned her to animating the ferocious dogs chasing Faline. Until Retta came on the scene, women in those days were employed only in the nunnery... er... Ink and Paint Department whereas the Animation Department was the sole domain of men. Hey don't send me any letters, I'm just the messenger here ladies.

My room during Black Cauldron was a corner one between directors Art Stevens and Ted Berman. Long story but Art "retired" during that project and it was one of those awkward events where no one had planned anything to celebrate his long tenure at the studio. I told Patty who rushed to the local grocery store to pick up bottles of Champagne, cups, cheeses, coldcuts and threw a retirement party for Art. We got quite a crowd, mainly of the Disney veterans who were still there to attend. Afterwards, Art found out Patty had put it together and thanked her with tears in his eyes. That's my Patty, always trying to make everyone happy!

Patty went on to be hired as  "Project Lead" for a new animated film titled, "Beauty and the Beast" directed by Dick Purdum and I was now working for my wife doing a little early concept work on that picture. By the way, the studio planned it as non-musical at that point! Of course that was before "Little Mermaid" was released and became a hit thus providing a "blue print" or" formula" as to constructions of many of the future animated features.

When our daughter Kim was born, Patty decided she wanted to spend more time being a mother and after a lot of thought, sadly turned down the request from Disney Studios to move to London for pre-production on Beauty opting for work that was closer to home. Today she concentrates on volunteering her services to a variety of community projects, speaking on film and animation panels and attending Disney fan events. She is currently a Disney Master Artist designing art pieces that are shown and sold in Disney Galleries located in Disneyland and around the world. She is also a proud Legacy member of Women in Animation where she is a mentor to the younger generation of up and coming ladies. Happy Birthday to my favorite Disney gal, Patty!