In the late 1800's, Elias Disney and his wife Flora decided to put down roots in Chicago and build a home for their growing family of two sons. The family gained two more boys, Roy on June 24, 1893, Walt on December 5, 1901 and a daughter Ruth on December 6, 1903. Eventually Elias sold the property when the family moved on to Marceline, Missouri.

The property went through various owners and was about to be placed on the chopping block until purchased by Dina Brenadon and Brent Young. This wonderful couple are making it their mission to restore the home to it’s former 1901 appearance and to protect it there after as a historical landmark that will be enjoyed by the public.

Patty and I were invited up to join the festivities surrounding Roy Disney’s birthday and take to part in a “Creativity Days” event at the birthplace of Walt Disney. Dick Van Dyke and his lovely and talented wife Arlene would also be there to liven the celebration so we had to say yes. Todd could invite us to an earthquake and I would probably still say yes, he's that nice of a person.

Since Dick was going to be there, I decided it would be fun to don his movie costume (albeit an enlarged version) as the sidewalk artist from Mary Poppins. Todd liked the idea so Patty and I arrived at Walt’s home early in the morning before anyone was scheduled to show up and got out the chalk. It didn’t take long though before neighborhood folks started gathering to see what we were doing on the sidewalk.

The pose of Mickey I designed was purposely sketched in an elongated perspective to be seen from a child’s view so that when they approached the home, it would appear that Mickey Mouse was actually rising in 3D from the sidewalk. I wanted Mickey to join in with the restoration of his "poppa's" place.

Now I was raised in the deep south and Patty is from the East coast so we're used to humidity but living for decades in Southern California has gotten us both used to what everyone calls, a "dry heat".  To say it was humid is an understatement. (It was so hot in Chicago that weekend that the cows were giving evaporated milk and the chickens were laying hard boiled eggs). I had to be careful not to let my perspiration hit the chalk which made having “Bert’s” scarf a welcome sponge of an accessory to my sidewalk artist wardrobe.

We weren't sure we would finish it before the crowds started showing up if we finished it at all. With my Disney animator wife Patty at my side or I should say at my "sidewalk", we both were able to complete it in plenty of time. It was a joy spending time with home owners Dina, Brent and their precocious son Truman who acted as my "supervisor" while I drew Mickey Mouse.

The crowd easily numbered over 1,000 and the smiles on the faces of those young and old made the entire weekend one filled with magic.

Dick soon showed up and the excitement grew as children were called up to place wishing stones they had each painted at the base of the newly planted tree in Walt's front yard. 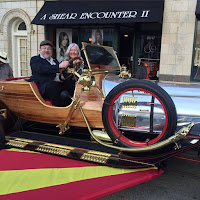 The assembled group then treated everyone to a rousing chorus of "Let's Go Fly A Kite" as the children held up the kites they had made during the event. Dick's acapella group the Vantastix provided a strong backing to the community sing-a-long.

We were then driven over to the next event on the schedule and that included our meeting up close and personal, our favorite automobile in the world, "Chitty Chitty Bang Bang." Dick assured me that it gets better milage in the air than on the ground but nevertheless it was a treat to get behind the wheel.

Later that evening we were entertained further by Dick, Arlene and the amazing acapella group, The Vantastix (which reminds me that yodeling is often a cry for Alp). Patty and I really enjoyed spending time that evening chatting with Dick and Arlene Van Dyke and sharing a few stories. We want to thank everyone who participated and who made this magical weekend possible: Todd, Lance, Dina, Brent, Truman, Dick, Arlene, Rey, Patty and so many others who contributed their time and passion.