The "E" Ticket at Disneyland

I was asked recently just what is an "E" ticket? What makes it so special? And since so many Disneyland guests today only know about the single pass to enter into the Disneyland park and enjoy all the attractions, I thought it might be fun to share a bit about the old ticket books we used to use and enjoy.

When Disneyland first opened, it was cash on the barrelhead. In other words you paid at the main gate to gain admission, then paid anywhere from 10¢ to 35¢ for each ride after that. Some guests complained about being "nickled and dimed to death" so Walt came up with the idea of using ticket books which entered the park starting around October 1955, just 3 months or so after the original opening of Disneyland.

Originally they had "A" through "C" labeled tickets which were identified as "A" being the simplest to the "C" designating a fancier attraction but soon a "D" designation was added as the attractions grew. In June 1959 the park introduced the Monorail, Matterhorn and the Submarine attractions.which were at that time considered the elite offerings and so the "E" ticket was born which meant, "These rides/attractions are the best and most exciting ones we have in the park!"

Of course it's still up to the guest whether they agree with that point of view but nevertheless the "E" ticket meant you had the opportunity to experience what was the best Disneyland had to offer and those tickets got used up quickly, then the "D's", onto "C's" and so forth. By the time I would leave after the fireworks had faded into silent embers, I usually had an "A" and maybe a "B" ticket left in my book which I would keep as a souvenir of another magical day at Disneyland. -MP
7 comments:

Labels: Magic Kingdom, Then and Now

I am very honored to have a few pieces in the upcoming "Steampunk Celebration" at Disneyland. I'll be appearing at the Disneyana Gallery and Shop on Main Street U.S.A, Disneyland-  Saturday  February 22, exhibiting three new original paintings in a show I hope you will all enjoy. Half of my work these days is produced digitally on the computer but when I'm asked to conceive something for Disney collectors, I only  use traditional hand tools, techniques and methods the way we used to at the old Disney Studio. Disney collectors deserve it!  Some of those same fine folks have written me requesting more photos of the painting process and since I sometimes forget to do so, my lovely wife Patty kept sneaking upstairs into the studio and scaring the beejeebers out of me to get these shots. I just wish she would let me get out of the shot before she takes the picture.

The first painting I did was "20,000 LEAKS UNDER THE SEA", a humorous send up or maybe I should say sinking of the Walt Disney classic, "20,000 LEAGUES UNDER THE SEA". Once I came up with the funny title twist, everything else fell into place. With Captain Mickey Mouse in command you would think things would be ship shape, that is until you add crewmen Donald Duck and Goofy Dawg. Mickey is trying to keep my whimsical version of the Nautilus afloat while Goofy checks for leaks with his trusty hammer and Donald is ready to abandon ship,... er... uh... sub.

The color scheme of "20,000 LEAKS UNDER THE SEA" is loosely based somewhat on the unique range of hues frequently used by one of the most popular poster artists of the 1890's and a leader in the Art Nouveau movement coming out of France, Alphonse Mucha. The media is gouache on board over pencil and let me tell you if you haven't guessed already, those rivets were a nightmare, but worth the effort.

I went back to the "golden age"  look of Mickey, Donald and Goofy as we used to refer to it at the old Disney Studio. That era is roughly the late 1930s through the 1940s and I really prefer those proportions and model designs as the studio was at its height of artistic creation under Walt's guidance and it really showed in the features as well as shorts of that time. Of course my "toon take" of the Nautilus was based on the magnificent original sub from the classic film designed by an old friend from WED (Walt Elias Disney ) days, Disney Legend Harper Goff. I hope the Vulcania Volunteers out there will forgive me for the liberties I took with Harper's beautiful creation.

Another entry for the Steampunk Show is "MAD HATTER to the QUEEN", using the wonderfully eccentric Ward Kimball creation from Walt Disney's classic animated feature, "ALICE IN WONDERLAND".  Besides trains, Ward was a huge fan of Victorian Advertising art and typography. He in fact did a couple of doodles in that vein for me when we briefly worked together at WED. He'd have gotten a kick out of this but would have definitely suggested I "spice it up" with something off beat and funny. Ward's sense of design coupled with his sense of humor was out of this world.

The Hatter himself is nestled inside a clockwork setting holding his needle and thread with milliner tools on one side and his freshly constructed hats on the other. I outfitted him in a full steampunk cloak, boots and hat complete with goggles and lens attachment for close up sewing work. You must remember that the Queen of Hearts is very particular as to her head wear. Let's face it, no one wants to lose their head by upsetting her majesty.

For this look I was inspired by the beautiful ink engraved illustrations drawn by John Tenniel for the original editions of, "Alice in Wonderland". I cleaned up my rough drawing into a single line and transferred it to board. After tightening that drawing further I then used center points with a compass to accurately setup the gears and their teeth. A lot of the drawing tools I used were actually objects used by cartographers back in the day to ink lines on detailed maps when they used to do them by hand. I thought I would never get this one done but it was an exciting exercise in old techniques. Then on to the paint!

The painting is 100% gouache over pencil on board. I layed in a light wash to setup the base colors and values then applied lines. The intricate lines are each painted by hand using a limited 16 color palette to achieve a Victorian advertisement style. We have been informed since the painting was completed that if all of those fine lines that make up this piece were stretched out into a single line it would stretch over TWO FOOTBALL FIELDS!  Well no wonder I ran low on paint! This engraved look was achieved completely with 2 tiny brushes, a 35 plus year old vintage Disney Feature Animation Studio "ARTSIGN# 0" and a "PRINCETON #2" along with a sponge to apply the outside texture. It took a steady hand and lots of encouragement from cookies, candy and eggnog. 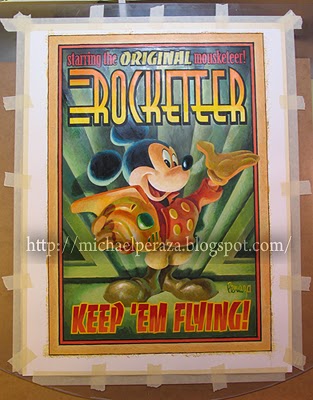 My last piece for this exhibition showcases my favorite Disney star, the little fellow that everything else in the wonderful world of Disney was built upon, Mickey Mouse! I wanted to make him the hero of the piece by taking the original "Mouseketeer" and turning him into the "Rocketeer".

This illustration actually leans towards "Dieselpunk" within an "art deco" construction while emulating a bit of the WPA poster era. My Mickey again was inspired by the "golden age" model designs of Mickey from the late 1930s and early 1940s. I painted this with acrylics over pencil on board. 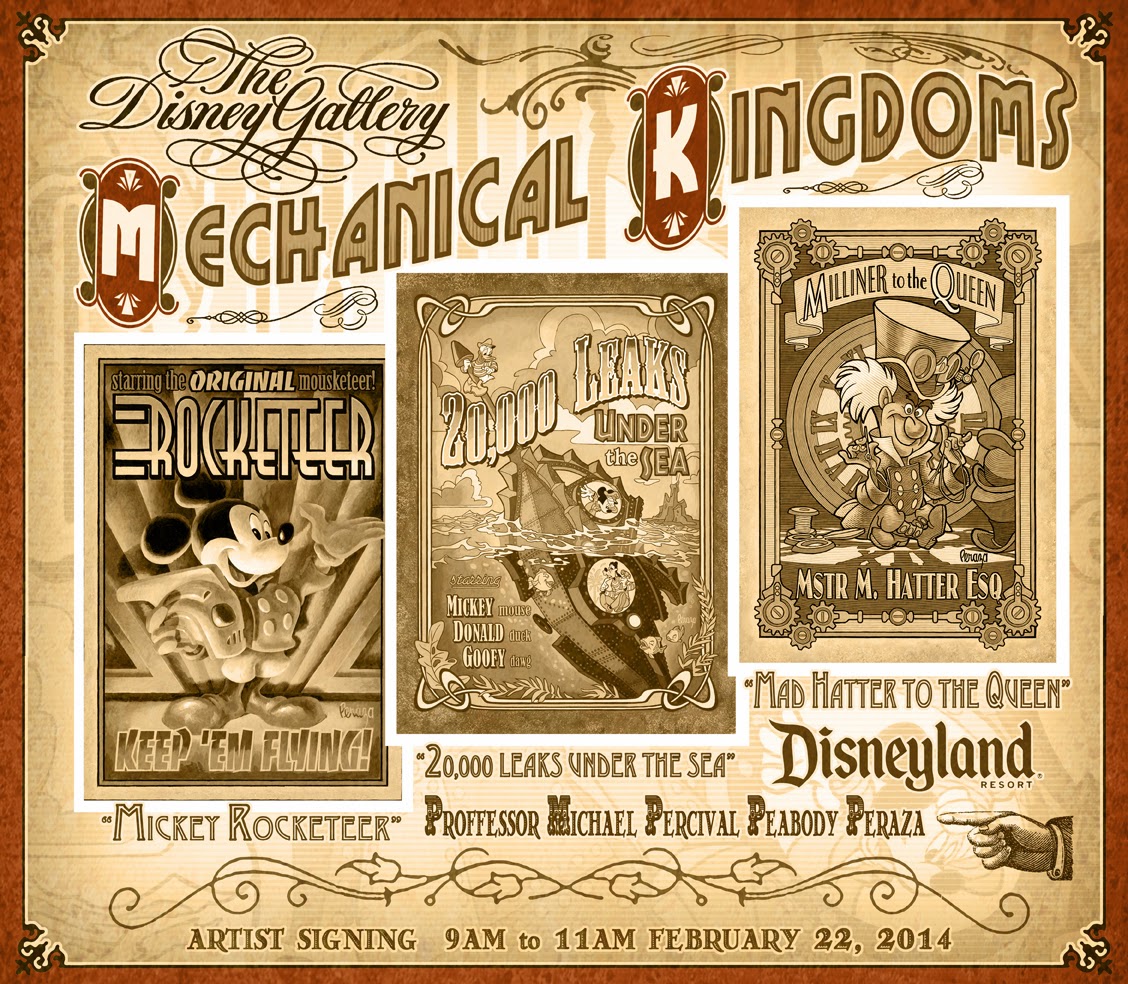 So please keep this date in mind,  Saturday  February 22, at Disneyana Gallery and Shop on Main Street U.S.A, Disneyland  for "STEAM DAY" and I'll be there from 9AM to 11AM   By the way, for anyone not familiar with the term Steampunk, it's a fun and fashionable send up of the very popular trend inspired by a sort of British Victorian age meets the American old west within a glue of steam powered gadgetry with a bit of 1950s retro sometimes sneaking into the background.

Come out to the Disneyland Gallery and say hello. The Disney Gallery staff is always helpful and very friendly. Not only will these originals be for sale but they will have  prints on hand for purchase and signing. There will also be lots of other stunning pieces of art on display by some very talented friends of mine that I am fortunate to share the "stage" with. I hope to see you all there at the happiest place on earth, "DISNEYLAND!"