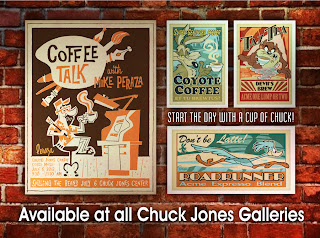 Over 100 people got up from their cozy beds on a Saturday morning and started the new day with a delicious hot cup of coffee and enjoyed some tantalizingly new artwork at the Chuck Jones Center in Costa Mesa July 6, 2013 from 9:30 to 11:30 AM. The staff served 3 new piping hot pieces that I hope didn't curb anyone's caffeine craving and as my butterfingers framers say, were good to the last drop.

I shared some funny anecdotes about my 40 years of daily grind in the wacky world of animation from animated commercial breaks for the local television station WKRG Channel 5  in the early 1970s to working on some very beloved full length animated features and television series for all of the major studios from Disney to Warner Brothers (even a brief stint working with Chuck on a Bugs Bunny film) and a few stops in between. In other words in coffee-speak II was "spilling the beans" coffee beans that is!

For these illustrations, I wanted a kind of whimsical retro throw back using a limited color scheme that one might see in the great WPA posters of the 1930s and 1940s. By the way, Coyote and Road Runner was actually painted with a little coffee mixed into the gouache and Taz had a spot of tea infused with gouache.  The group really enjoyed the pieces and I found myself signing prints immediately after the talk was done.

The Coffee was MUCH easier to paint with than the tea which took many and I mean MANY layers to even show up. The nice folks who purchased these prints really got a kick out of it and I enjoyed the opportunity to paint with such a unique type of "watercolor". Afterwards I did some embellishment by way of small paintings at the bottom done in what else? Pure Coffee for the Coyote and Road Runner, and likewise-  Tea for Taz (... and Taz for Tea... you and me... sorry I'm musically inclined). The extra embellishments were a hit and the collectors let me know it which certainly made my day. 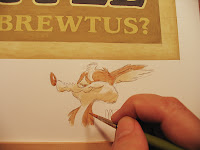 It was a mighty delicious morning to spend with so many friends old and new, and I enjoyed every minute of it. Now it's time to head on back to the old desk and get back to drawing.

Donald Duck made his first appearance today back in June 9, 1934 in Walt Disney's, "The Wise Little Hen." That role may have been his beginning however it was his second film, "Orphan's Benefit" that showed his temperamental foil for Walt's star Mickey Mouse.

He would go on to appear in over 180 theatrical films, more than any other Disney character and is the fifth most published comic book character in the world. His distinctive voice was created by Clarence Nash who performed the role for 50 years and was a regular at the old Disney Studio when I started working there in the 1970s along with his custom made ventriloquist dummy of none other than Donald Duck.

When Clarence passed away he personally left the future of Donald's voice in the capable hands, or make that mouth, of Tony Anselmo who besides continuing Donald's squawks is also a fine animator.

Donald has been an important part of my life with the television series, "DuckTales"  for which I had an opportunity to reunite with comic book legend Carl Barks during the concept stage of the show. The man who headed up the original Disney program at Cal Arts in the 1970s was Jack Hannah, another incredible "Duckman" and a good friend to both Patty and I. I'm also proud to say that all four of my fellow "Duckmen" are also Disney Legends and deserved ones they all are!  Well toots, it seems that the irascible Donald has affected me in addition to many of us out there for which I am grateful.  Happy Birthday Donald!
5 comments: 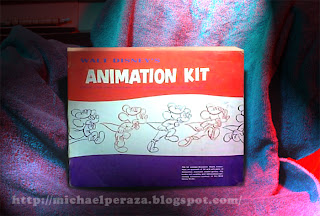 How many of you remember the treasure house called "The Art Corner" at Disneyland?  The Art Corner looked like something out of a Parisian dream from a Vincente Minnelli MGM musical which was odd being that it was housed within the futuristic area of Tommorrowland. After it opened at that location in September  1955 it became a regular destination for young artists and budding animators to visit. Why? Because in that wonderful little store one could purchase items that collectors today would give anything to own. One could buy flip books of Mickey, Donald, Pluto and the rest of the original Walt Disney stock company. 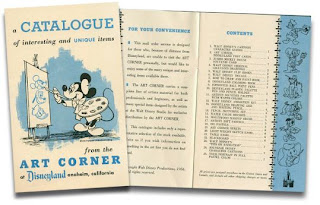 There were plenty of colorful postcards of the new park illustrated with the same wonderful gang. You could also pick up vintage Disney cels for 75 cents to five dollars with a strangely mismatched BG print suitable for hanging. I was fortunate to pick up a bunch during our trips! As most of you now realize these cels are highly sought by both collectors and fans of the art of animation Disney style although they have risen dramatically in price over the years. Cels that went for 75 cents can now be found from time to time on ebay being offered (and sold) for hundreds and sometimes even thousands of dollars in a few cases. Besides the animation cels, they also offered unique items such as this Animation Kit. 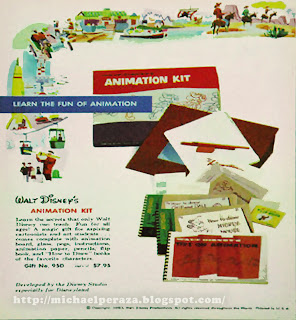 The description is as follows:
This kit is the result of considerable research and experimentation by the artists at the Walt Disney studio and is designed for anyone who likes to draw and has an aptitude for cartooning. It is complete in every detail and contains the following:

Great way for the budding animators out there to get a head start. Sadly "The Art Corner" closed in 1966 but for those of us lucky enough to have been able to shop there it has provided memories (and souvenirs from the classic days of Walt Disney animation.