"Tools of the Trade"

I like to sharing trivia about various mediums we used at the Walt Disney Studios before the digital age came upon us so here are a few you might be interested in. 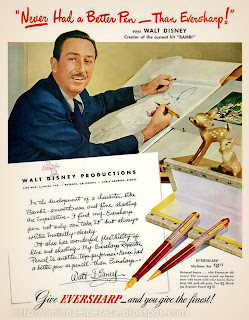 First, here's an interesting ad from the Saturday Evening Post published around the release of BAMBI,  showcasing Walt Disney and a vintage Everlast pen and pencil set. As fine a quality as these were, they were only used for writing and not drawing at the old studio. The fellows in animation production who sometimes used pens like Ken Anderson definitely favored the Montblanc brand with sketching nibs.

With the "ONE-TWO " punch of a strike and war, Walt had to embrace even these little opportunities when they came along to put something back in the dwindling studio reserves. The set pictured was most likely used by Walt for a short time any way and I'm assuming as is the custom of many companies trying to sell their items, some free sets were probably given to the studio to be used as publicly as possible. More likely by writers though than by artists.

Just a note to anyone still using the old KOH-I-NOOR pencil holders like the ones we used to use for story sketches and roughs at Disney Studios. The various quality leads are becoming hard to find and lately I've picked up some very inferior ones at local art stores loaded with filler and binding material that fracture and break off in tiny specs while drawing. 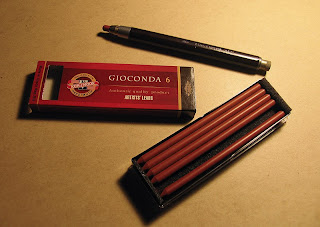 However, I just received a pack from GIOCONDA 6 that are actually made for KOH-I-NOOR/HARTMUTH from the Czech Republic in SEPIA that exhibits no filler problem, goes onto paper in smooth soft strokes and the leads really hold up to hard use. I hoarded a couple of boxes from the old studio that date back to the 30s and these really match them for handling and appearance.

I should add that a number of manufacturers make various versions of these pencil holders that work pretty well if you can't find a KOH-I-,OOR the lead is the most important element of the two.

The holder pictured here is a vintage 5649 that dates to 1937 and was given to me by Ken O'Connor.