Today we celebrate the birthday of a man who grew through his creativity, hard work and leadership to become a legend and inspiration to "children of all ages". His life overflowed with many "firsts". The first animated film with complete sound, starring Mickey Mouse of course. The first animated film to be produced in full color, the first full length animated feature, "Snow White and the Seven Dwarfs", first major Motion Picture Studio to embrace television as a alternate production outlet and so on. And the name that comes first to so many minds when you think of good solid entertainment for the entire family... Walt Disney!

His "Three Little Pigs" gave Americans a jaunty little tune to help get them through the Great Depression and "Donald Duck's antics in "Der Fuehre's Face" offered much needed laughs during the second World War. Rather than attempting to place my own words into Walt's mouth as a few film historians will occasionally do, I'm simply including a few quotes below from Walt himself to offer a bit of insight into his mind and heart.

"We are not trying to entertain the critics. I'll take my chances with the public."

"You can design and create, and build the most wonderful place in the world. But it takes people to make the dream a reality."

"You're dead if you aim only for kids. Adults are only kids grown up, anyway." 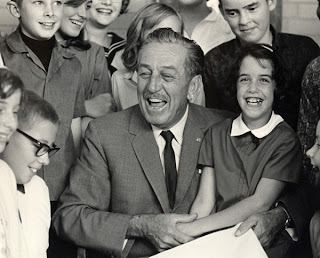 "To all that come to this happy place: welcome. Disneyland is your land. Here age relives fond memories of the past, and here youth may savor the challenge and promise of the future. Disneyland is dedicated to the ideals, the dreams, and the hard facts that have created America... with hope that it will be a source of joy and inspiration to all the world."

"Disneyland will never be completed. It will continue to grow as long as there is imagination left in the world."

"I only hope that we don't lose sight of one thing - that it was all started by a mouse."


As much as I would like to, I am going to stop right here. I won't go into a biography of Walt's life here for this birthday posting, as previous authors have accomplished that already at book length and most were well written and informative. I merely wanted to remind everyone of a very special man who never grew up thankfully and went on to touch many lives around the world.

As Eric Sevaried reported on the evening news while summing up Walt Disney:

"He was an original. Not just an American original, but an original. Period.  He was a happy accident, one of the happiest this century has experienced. And judging by the way it’s behaving, in spite of all Disney tried to tell it about laughter, love, children, puppies, and sunrises, the century hardly deserved him. He probably did more to heal - or at least soothe - troubled human spirits than all the psychiatrists in the world. There can’t be many adults in the allegedly civilized parts of the globe who did not inhabit Disney’s mind and imagination for at least for a few hours and feel better for the visitation.

"It may be true, as somebody said, that while there is no highbrow in a lowbrow, there is some lowbrow in every highbrow. But what Disney seemed to know was that while there is very little grown-up in every child, there is a lot of child in every grown-up. To a child, this weary world is brand-new, gift wrapped. Disney tried to keep it that way for adults."

"People are saying we will never see his like again."