If I listed every single member of our remarkable "DuckTales"crew, this chapter would be 3 pages longer so please forgive me if I only mention a few. Fred Wolf wore the bill as "Top Duck" Producer with Tom Ruzicka watching his back, direction by Alan Zaslove and Steve Clark, with Tedd Anasti and Patsy Cameron story editing the "tales" supported by  seasoned writers such as Mark Zaslove. The Ducktales Art staff included our fearless leader, Brad Landreth as Art Director, Skip Morgan was his trusty associate,  Mike Peraza on Key Layout Styling and concepts with Ed Wexler providing additional layouts. Storyboards were expertly sketched by Thom Enriquez, Rick Chidlaw, Marty Murphy, Steve Gordon and Hank Tucker ( They even allowed me to storyboard a couple of shows). Background Painting wizard Paro Hozumi brought breathtaking color into the settings assited by Gary Eggleston and topped off with Jill Stirdivant adding perfectly matching color models.
Our character designs were greatly enhanced by a couple of friends of mine also from Disney features, Ed Gombert and Toby Shelton. I had contacted Ed and Toby, telling how much greener the grass was growing over at TV. To my happy surprise they liked my spiel and joined up.  Toby went on to become a producer in later years at TV while Ed and I were to escape back to features for "Little Mermaid". For some reason a schism developed that wedged between the two animation divisions as far as what was perceived as "raiding" the feature talent pool. It sounds preposterous but it was very real. Staff was called in and asked not to contact feature folks about joining our ranks. I'm just glad we smuggled Ed and Toby out before the barb wire wall went up. Of course they never did discover the third escape tunnel... 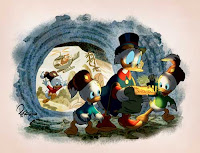 My first assignment was to create concept art that would be used to pitch the series to management. Having a great idea for a series and getting a greenlight to produce it doesn't always go hand in hand in Hollywood. We formed ranks and went to work. Brad was in charge of assembling the pieces and I was joined by Skip and Paro to round out the team. We created about a dozen pieces that looked like mini posters of what we perceived as the "DuckTales" world. Some were inspired by Carl Barks comics while most were completely original creations. It was real teamwork as we all shared working a bit on this one, then add something at that one, redo this other one, etc.. The pitch was presented and we held our collective breath. Would the suits like the series proposal or was it "duck season" with us as targets? Michael Eisner and Jeffrey Katzenberg and the rest of management loved it! Bob Jacquemin who was in charge of the new syndication unit really flipped and convinced Eisner to let him ramp up the series 13 episodes to a full slate of 65 for sydication. Michael Webster got us together and relayed the good news and we were ready to fly! Donald Duck would in essence drop off his nephews Huey, Duey and Louie with his Uncle Scrooge while he joined the Navy. Together with their housekeeper Mrs. Beakly and Scrooge's disaster prone pilot Launchpad they would travel the world over during their colorful feather-brained adventures. Now I was sweating. I had to design the mansion Scrooge lived in not just interior and exterior but cut-a-way sections of the various rooms and scaling charts for character placement. I also had to crank out settings from the City of Duckburg to Wild West towns. In short, I had to have settings ready to supply to the storyboard department and to give the background artists something to paint. The hectic hurried "we need it yesterday" pace in television production is a bit different from the ho-hum leisurely shall I say ... relaxing pace one works under when vacationing at the resort villa we call feature animation.
An average week for me on "DuckTales" went as follows: Monday morning arrive as usual at 7:30, either first one in or second following Michael Webster. Tedd and Patsy also got in early and would give me a heads up on the latest story. Plenty of doughnuts and bagels in the kitchen, hey maybe THAT"S where I started my "animator's gut! Damn those rainbow sprinkles! Anyway, I would have a script  soon after and would zip through the story in a few minutes. I love to read which helped me digest the nonstop scripts quickly. By the time the rest of the crew arrived I could give any who asked what the breakdown of the storyline was so they could just sit and draw. I also made a list of locations as Skip did with characters. I then would thumbnail about 15 very tight drawings of those locations, handing out a few to the layout staff to blow up and finish after running them by Brad who almost always OK'd my doodles. Working off little thumbnails was something I had learned from veteran Disney Legend Ken O'Connor. Using his methods I could generate from 10 to 12 layouts a day and these were keys, meaning each was very different.
Cranking out the large number of exotic locations so quickly was possible for me due to a huge clip file I had assembled in my room with reference on subjects from ancient Egypt to rocket travel, basically anything that might be a location for an episode. This was a tip I was handed by Disney storyman Vance Gerry who maintained a marvelous clip file in his room at the studio. My mini library was open to anyone who needed it. The next step would be for me to caricature the location to fit the story and business while adding a few "duck" features wherever possible. Sometimes if I had a few moments I would do rough color treatments to pass along to Paro, not that he needed any help, just that sometimes when you're drawing in black & white, you're thinking in color. He appreciated my suggestions and always used them. Paro was a fine example of the traditional step used by Disney production in theory, that every step gets improved as it goes through the creative process. That certainly was the case on "Ducktales" due to the dedication of the staff and management.  As the day wore on we would get our assortment of corrections to the script. I say assortment because they arrived in a multitude of colors, blue pages, pink pages, yellow and so on. A troubled script could look like some kind of freaked-out technicolor phonebook within the span of just a couple days.