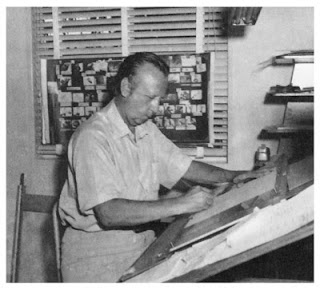 Don Griffith was the head of the Layout Department at Disney Studios for many years and the de facto Art Director from from the mid sixties on through the seventies. In addition during the 1970's, he helped usher in a young group of kids hungry to learn the tricks of the trade from this master. I had a special affection for Layout as it was explained to me by a teacher at Cal Arts, Ken O'Connor. Layout was the area where the film was staged, where the setting was designed to best portray the character and further the story with specific background design. Ken had recommended me to Don and I was flattered to be able to work with him. Don had been Ken's assistant once upon a time many years ago during Pinocchio.

Don was born on February 3, 1918 in Montana. His dad had passed a way when he was a boy and his mom moved the family to Hollywood where she operated a boarding house. He got a job at 19 after interviewing with Walt at Hyperion. He moved over to the Buena Vista address where he met a bubbly secretary named Kay. They married and had a lovely daughter Dolores.

The first day I arrived at the studio, Don took it on himself to show me around. He took me out to what was then one of the Disney Studio watering holes I believe was called El Chiquito Restaurant across from Warner Brothers Studio. We all just fondly called it, "El Sloppo's". Don held court in the corner booth as our regular waitress, Madge kept the glasses and the chips filled as we balanced spoons on our noses along with shot glasses on our heads to gain her attention.

"Rescuers" had just finished and I was put into production immediately on, "Fox and Hound" with a sideline stint doing concepts on new film proposals that never got the greenlight. Frank Thomas and Ollie Johnston had done some of their usual sparkling personality animation with the young fox and the puppy playing around the old watering hole, not knowing that they weren't supposed to be friends. The morality tale was heartfelt as the animation and I loved being able to work with Don on those scenes and many others. He really took me under his wing and showed me some great techniques and general approaches to laying out scenes he had gleaned over the decades on movies from Pinocchio all the way to Rescuers. Don, like many of the Disney guard, was a very patient and generous person. He could take a drawing I had tried to instill some strong staging into but was still lacking something and make it work. I knew I could always ask his advice with nothing but positive feedback from his lips. He would take my sketch and place it on his scene planning board. With an overlay of vellum and an occasional cigarette ash, he would proceed to add just a bit here, tweak a bit there, and voila, it looked like a masterpiece!

He handled everyone there at the studio with kindness and respect and they in turn reciprocated that same outlook to him. I can't state clearly enough that Don Griffith was one of the key Art Directors at Disney over his over 50 year time at the mouse house. His sketches from Hook's ship and Neverland or his ink drawing from 101 Dalmations and Winnie the Pooh are breathtaking in their beauty, clarity and key use within their prospective films. Famous scenes such as the meatball dinner in "Lady and the Tramp" were also Don's setups. He was one of those fellas who flowed liquid talent from their pencils and we were all very sorry when he finally retired.

The studio wanted to throw a huge retirement party and kept after him but Don wanted nothing of the sort, being the humble guy he was. My wife Patty and I however did something about that. We threw an intimate Retirement Party for the "Griff" with old friends like Jack Hannah, Ken O'Connor, Ray Aragon, Dick Lucas, Ed Gombert,  Mike Hodgson and many others in our backyard.  They enjoyed a boisterous and funny roast along the lines of the old TV show, "This is Your Life" with guests first "appearing" as voices on an offstage microphone as Don sat listening and laughing. The guests enjoyed dinner amidst lifesize plywood cutouts I had created of Walt Disney's "Alice in Wonderland" including the teaparty sequence Don had layed out. I'll have to get those pictures (and video) out and post them when I can find them.

A lot of the Disney vets lived by the adage, "He who dies with the most toys wins!" Don's warm corner at the old studio was chock filled with toys, puzzels, gags. That sense of fun carried over into endless rounds of Uno and other card games between the Griffiths and Perazas and any hapless guests who stumbled into the fray over at their house on Friday nights. Sadly Don passed away on February 9, 1987.
He also left us with the admiration of all lucky enough to know him.